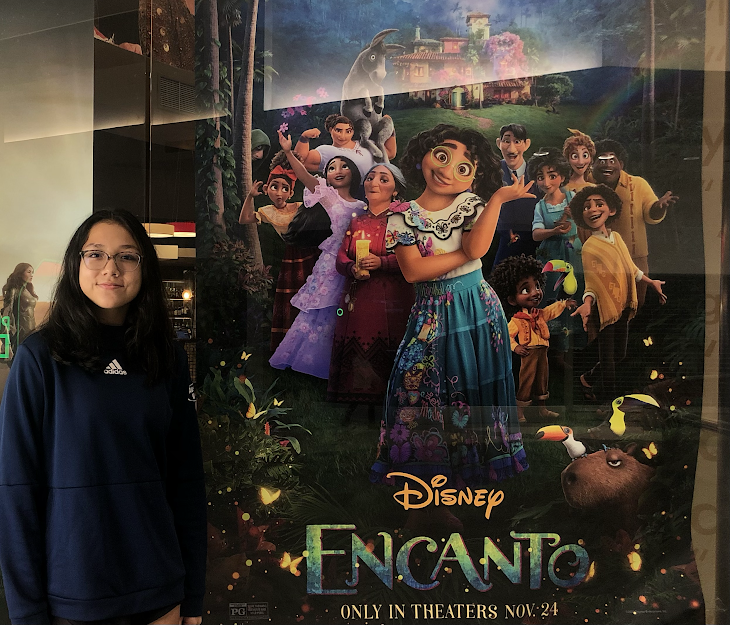 The movie “Encanto” showcases a magical home with a magical family. The story takes place in rural Colombia where the family uses their powers to help others in their town, except the main character who is not gifted any powers. The movie is only in theaters, Nov 24. through Dec. 24, after it will be available to stream on Disney Plus.

As the bright and colorful “casita” shines in the glistening sun, tall mountains enclose a small town called the Encanto. The meaning of encanto means charm or enchantment, which made me curious about what the movie could be about. As a Disney fanatic, when first hearing about “Encanto,” I immediately felt excited and had to watch it in theaters because all of my childhood memories consist of watching Disney movies with family and friends.

When looking at the trailer, my first thought was that it was extremely vibrant and full of color. The trailer consisted of a basic plot of the movie, which described a magic house with a gifted family that lives there. This instantly reminded me of the classic Disney movies I had grown up watching as a kid, for example: “Aladdin,” “Beauty and the Beast,” “The Little Mermaid” and “Cinderella.”

During the movie, something that I noticed was the cultural representation. The setting of the movie is based in the mountains of Colombia, and the movie represented aspects of Colombian culture. Colombian culture was showcased through food where arepas con queso, a traditional Colombian dish, became an important part of the movie. The clothing was presented with colorful embroidery on all of the character’s clothing, along with melodious music that displays unique Colombian instruments, which include bandolas, tiples, and arpa llanera. By adding culture into the movie, this allows a whole new audience to be able to connect with the movie and makes the movie have a better feel.

The story is about a young girl named Mirabel Madrigal who lives in a magic house with her family. Her family consists of members who are all given gifts.  The powers they received through a miracle, are used to help their town. Mirabel, unlike the rest of her family, does not have a gift, and desperately wants to find her place in the family without one.

The plot continues when Mirabel notices that their “casita,” or house, is losing magic, which allows the Madrigal family to have powers. Mirabel decides that she wants to save their home so she can protect her family. She also wants to make her family proud and feel special without a magic power. My favorite part of the movie was when flashbacks were brought into the story, I believe bringing in flashbacks of the Mirabel and the Madrigal family allowed me to connect with the characters more and understand more of what they are going through.

The music featured in “Encanto” was created by Lin Manuel Miranda, who is known as the creator of “Hamilton” and songwriter for “Moana” and “In the Heights.” Not all of the songs were my favorite because Miranda usually adds pop music into the music he creates, but I enjoyed that during the movie you could sense the inspiration felt behind the music which allowed the movie to have a better flow.

As I watched “Encanto” in theaters, I did think some parts were cheesy but that’s expected in a children’s movie. I think this movie would be a great movie to watch with family for fun or if you want to watch a movie during the winter break. Although the movie is directed towards younger audiences, any age can watch and enjoy it. It very much reminded me of the feel-good movies, which were cheesy as well, that I grew up watching. The main theme of the movie was that no matter who you are, you are special in your own way. Very corny, but respectively important for younger audiences.

“Encanto” is exclusively only shown in theaters, until Dec. 24 where it will be available to stream on Disney Plus.