Divided as Students, Connected as Players 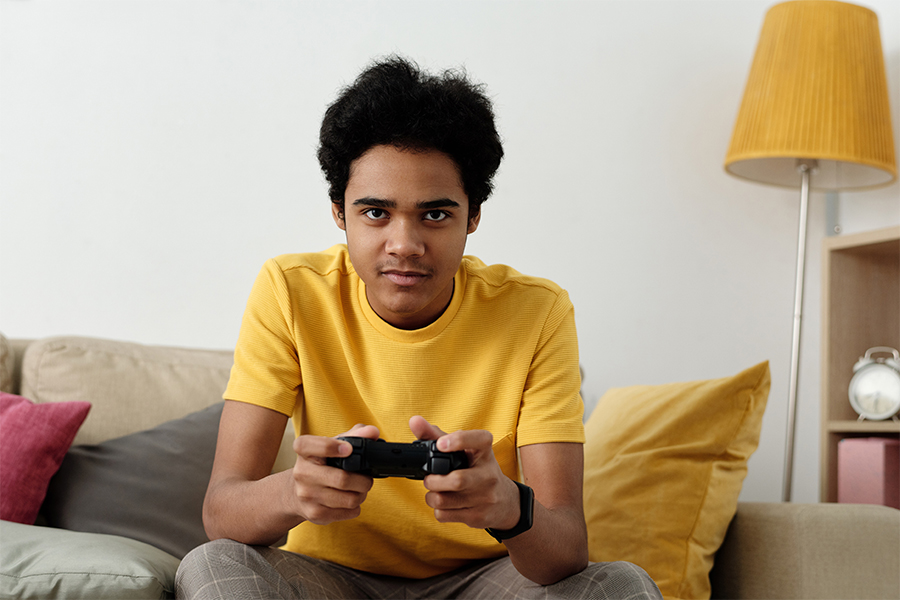 In March, video game sales were projected to be 34% up from last year. Released Aug. 4, "Fall Guys" is one of the most popular games to be released in COVID-19 season, reaching 2 million. "'Fall Guys' is a game that my friends play all the time,” sophomore Will Davis said. “You can easily make a new group and join a match of about 50 or 60 people. It’s like playing through an obstacle course where you can knock others off.”

During quarantine, students all across the country were confined to their houses as their range of activities were limited one by one. Many were faced with a new challenge of entertaining themselves from the comfort of their homes. However, through video games interacting with others became possible while physically separated.

Video games grew even further in popularity with the COVID-19 pandemic: the global gaming market was estimated to be worth $152 billion dollars at the end of last year, and in March, video game sales were up 34% from previously recorded numbers last year. So, what are the new games that the current generation is playing?

Released Aug. 4, “Fall Guys” is one of the most popular games to be released in COVID-19 season, reaching 2 million sales only a week after its publishing and still going strong with an active fanbase and a viral reputation.

“’Fall Guys’ is a game that my friends play all the time,” sophomore Will Davis said. “You can easily make a new group and join a match of about 50 or 60 people. It’s like playing through an obstacle course where you can knock others off.”

The game, inspired by TV games shows like “Wipeout,” is a battle royale where the objective is to navigate your way through obstacle courses and help your team win in a variety of minigames like “Fall Ball,” where your avatar has to shove a giant soccer ball into the right goal.

“Features like grabbing are also pretty fun to use in moderation,” sophomore Logan Davis said. “Basically, you could be jumping from platform to platform, avoiding all the right barriers and completely winning the game when the person behind you can prevent you from moving forward by grabbing you. It can be done at any time, and it honestly makes the game fun and frustrating at the same time.”

As time goes on, new patches and updates introduce more skins, maps and measures against hackers and cheaters. However, those who are burned out by “Fall Guys” have more options. Another popular game, “Among Us,” has earned comparisons to “Fall Guys” for its increased success in the pandemic, but the differences outnumber the similarities.

“Firstly, you get to know how well your friends can lie,” Logan said. “Since one of the two roles you can have in-game is trying to sabotage the other team or eliminate their members without being caught, it’s a really fun time trying to figure out who these people could be.”

“Among Us” differs from Fall Guys in that although it blew up in popularity in the COVID-19 era, it was released back on June 15, 2018 and received little fanfare. The gameplay consists of two teams, the majority falling into Crewmates and the rest Impostors. The Crewmate’s goals are to complete tasks around the maps to keep it running smoothly and identify impostors, and the Impostor’s goal is to sabotage them through covert killing.

“When a Crewmate body is found, the others can host an emergency meeting to decide who the impostor is,” Will said. “If you are one, you’re killed by being sent off the ship. I’ve had others almost blow up trying to insist they aren’t the impostors. There are chat rooms, but the real fun is to be had playing while voice chatting on a separate service.”

And for those uninitiated to the world of video games, there exist fun activities that any old group of friends can join and play. And they’re all rolled up in one package – “The Jackbox Party Pack” is a series of seven installations that each contain party games like “Quiplash,” “Survive the Internet” and “Patently Stupid,” all of them ranging from writing the funniest response to a prompt to guessing trivia questions.

“Before the pandemic, I didn’t play many video games and I had to find something to do,” sophomore Jack Polishook said. “But with ‘Jackbox,’ you just enter a room code and have fun with your friends.”

The common thread between these games is their online feature and how they use it to ultimately craft a better experience for the players. “Fall Guys” puts players on a map and lets them duel it out until the very end, and “Among Us” is a game where deception is used alongside gaming skills. For casual players, “Jackbox” can give hours of laughs. Although separated during quarantine, these games help students feel connected.

“After a long day of online school, or maybe hours of doing nothing on a weekend, nothing makes it better than sitting down and playing some video games to cope with the boredom,” Logan said. “Video games fill a void in the lives of those who may be affected by quarantine, and they’re a fun experience for beginners and experienced players alike.”