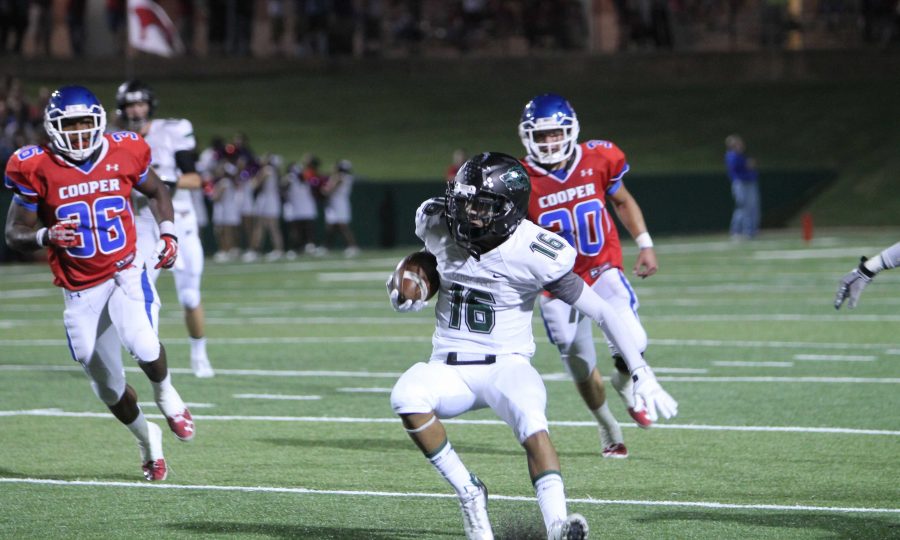 Senior Bill Estevanott carries the ball in the Abilene game on Sept. 6. Photo by Savannah Burchfiel

The varsity football team redeemed themselves after the first loss of the season with a blowout game. Cedar Park (2-1) faced their first loss in 15 games to Abilene Cooper on Sept. 6 at Shotwell Stadium, but returned with a win over Killeen Harker Heights 41-28 on Sept. 13 at Gupton Stadium.

“The loss made us realize how bad everybody wants to beat us,” senior Lane Waller said. “That feeling after the game was awful, and our motivation was to never feel like that again.”

In Abilene, yellow flags became a theme for the night, with eight penalties called on Cedar Park and eight more called on Cooper. Crucial plays were stopped by the penalties for both teams, and both teams also had game-changing fumbles. After Cedar Park tied the score and Cooper ended with a field goal in the last play, the game ended with a score of 24-21.

“We came to the field with something to prove,” Waller said.

One week later at Gupton, the Timberwolves brought in a win over Harker Heights. Senior Nate Grimm completed four touchdown passes and 232 passing yards. The first points were put on the board with a 28-yard pass to senior David Moritz in the first quarter, and the second quarter brought touchdowns by senior Thomas Middleton and Moritz. The third quarter featured a 94-yard touchdown and a 98-yard run followed by a 1-yard touchdown run for Harker Heights. In the fourth quarter, senior Bill Estevanott scored on a 3-yard run and junior Joey Carter scored on a 5-yard catch.

“When we play as a team, we know we can succeed,” senior Logan Imbornone said.

On Sept 20, the Timberwolves face the Westwood Warriors at Kelly Reeves Memorial Complex on Parmer Lane.  Kick-off will be at 7 p.m. instead of the normal 7:30 p.m. in honor of Westwood’s Homecoming.