Reminiscing In Memories at Season’s End

Basketball Players Share their Feelings Toward Weekend of Losses 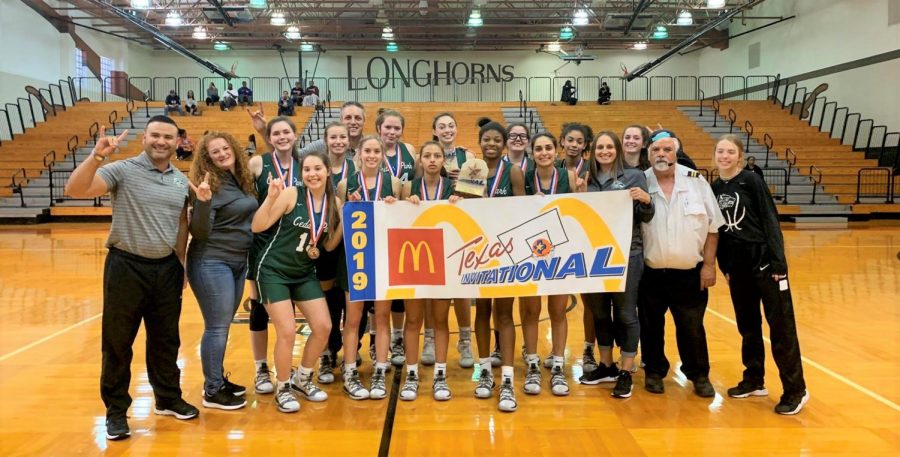 Cedar Park Lady Timberwolves basketball team poses after first place success in the McDonald's Invitational Tournament. The team finished 33-4 overall and broke school history by competing in the Regional Finals for the first time. "We had a lot of success this season, and shout out to our coaches for all the preparation they did to help us succeed the way we did," senior guard Donya Yazdi said.

The basketball season for both girls and boys Timberwolf teams has come to a close. The boys team traveled to Hearane on Feb. 28 to compete against Lake Creek High School for the area title and fell short while battling for the Area title, with a final score of 44-52. The next day, on Feb. 29, the Lady Timberwolves went to Houston to play in the Regional Tournament but got defeated by College Station High School 50-54. Although both team’s seasons came to a swift end on the same weekend, they still remain positive.

The Lady Timberwolves players took the loss with a grain of salt, reflecting on the efforts that were given to make the team’s legacy a lasting one. The girls went farther this season than any Lady Wolves team in the history of Cedar Park, making it as far as the second game in the Regional Tournament that allows the top teams from the region to compete for a chance to advance to the state tournament.

“The loss hurt a lot because we had a huge chance to compete in state and win,” senior guard Donya Yazdi said. “But we played for each other and we gave our 110% every practice and every game and at the end of the day, that’s what matters.”

Similar thoughts about team effort were felt throughout the entire team.

“The loss hurt differently this year since we lost in the game that could’ve taken us to the state tournament,” junior forward Alisa Knight said.  “I don’t have any regrets toward this season because something we always talked about is working our hardest on the floor to where even if we don’t like our outcome we know we played our hardest.”

The girls saw the end of the season as an opportunity to be thankful for the time spent together on the court and sharing the bond of teammates.

“This season meant a lot to me because these seniors I have grown up playing basketball with and the team chemistry allowed us to be so successful this season,” Knight said. “I hope our team chemistry remains intact despite the loss of our team leaders, the seniors.”

The boys team had similar feelings about the end of the season, reflecting back on the success of reaching the Area tournament and accomplishing a lot for the bond of the team.

“I’m not excited about losing in the second round, but overall we had a great season and it matured everyone on the team,” senior forward Luke Ferguson said. “I will cherish the memories I’ve made on the basketball court till the day I die; my teammates have grown to become my brothers and we have helped shape each other through the last four years.”

Timberwolf players feel as though this season amplified connections between the players.

“This season was better because the whole team was close and we were all friends on and off the basketball court,” senior guard Jake Hester said.

Both teams value the importance of deep relationships among the players and believe that the key to success is through the trust and friendship that is rooted in an overall team effort.

“I want to tell future players to remember the importance of playing with and for one another,” Yazdi said. “Don’t bicker or fight because we’re a team. It’s us against everyone else. Give each other your best in everything you do and you’ll see results.”