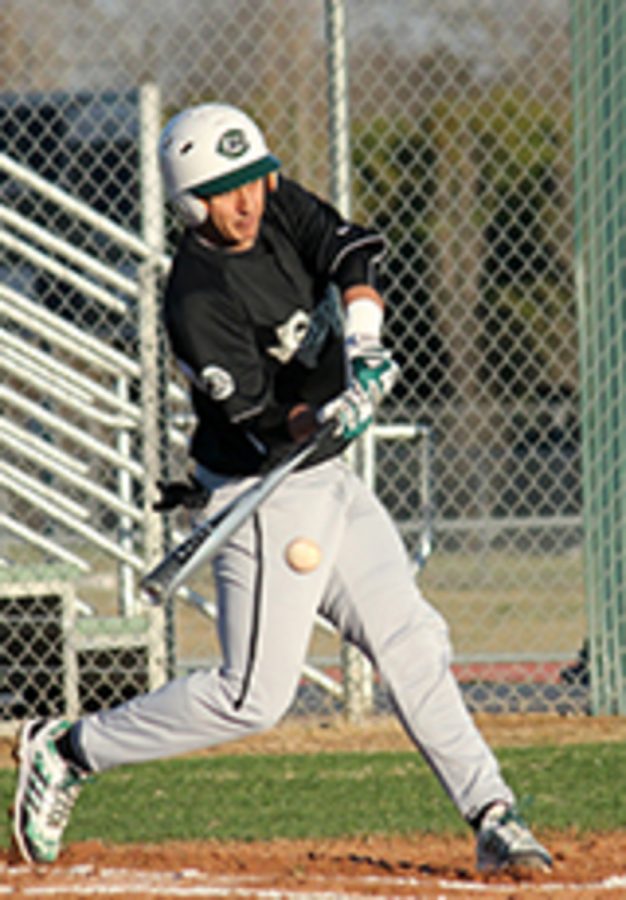 Eyes on the pitcher, junior Amir Alzer swings at the ball coming toward him. “While I’m at bat I think about trying to get to base,” Alzer said. “I like batting because it’s me against the pitcher so I get to compete with him one on one.” Photo by Lauren Campbell

After their nine-game winning streak was broken by Westlake, the varsity baseball team regained their footing, beating Rouse by one on March 25.

“This game was a very big deal to our team,” senior Blake Bouffard said.

The successful game against Rouse featured a multi-year rivalry between both the teams and families. Coined the ‘Cochran Clash,’ Cedar Park coach Connie Cochran went against his son Paul Cochran, who coaches the Rouse team.

“It only motivated us more because we had previously lost three out of the four times we faced them,” junior Jake Pokorney said. “We felt like we owed it to Coach Cochran to help him in his brotherly rivalry.”

On the other hand, senior Nick Gutierrez claims that the situation did not affect his motivation.

“It doesn’t matter who we play,” Gutierrez said. “We always want to win, it just feels a little better to get the win knowing that Coach will have bragging rights for a year.”

Regardless of differences of view on their coach’s family ties, the team members agree that their own team has developed a family bond.

“The team has bonded together so well this season,” junior Ryan Doyle said. “We’re all family on and off the diamond and we all play for the guy next to us, no matter the cost.”

“We are playing much more as a team this year,” Spradling said. “Last year, we all played for ourselves and only cared about our own success. But this year, we are really playing as a team and we care about each other a lot more.”

Playing as a family has been one factor for finding success, and, according to Bouffard, setting goals has also made an impact.

“Our motto this year has been ‘win each pitch’ and that’s what we have been doing as a team and we are having success,” Bouffard said.

Halfway through the season, the team continues to work towards its goals. Doyle outlines some achievements that the team hopes to earn.

“Our team goals for the season are to play every ball game to the best of our abilities, to knock out each team one game at a time and to go all the way to get the District Champion Title and the State Champion Ring,” Doyle said.

With three seniors on the team, the majority of the members are juniors. After Bouffard, Gutierrez and Shawn Taylor graduate this year, the incoming senior class will have more varsity experience.

“We are expecting huge things next year,” Spradling said. “We have a really strong junior class and everyone is excited that we have another year, but right now our focus is this season.”