Sophomore Figures Out His Future 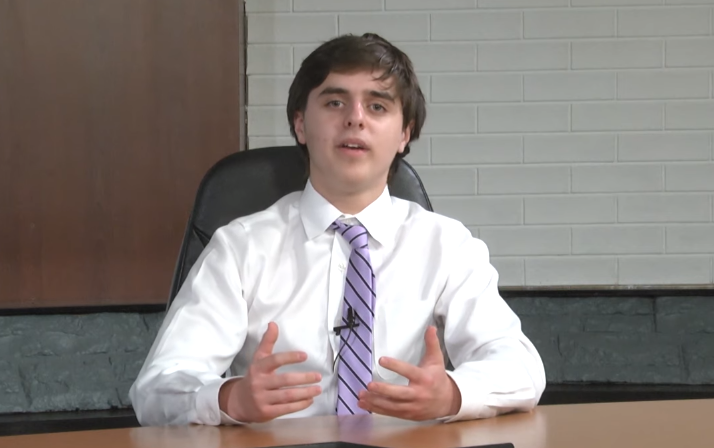 Polishook reports for the CPHS WolfPack. Broadcast is one of the sophomore's many interests. “I took Broadcast just because it's a career choice that I'm interested in, whether that be reporting, journalism or operating a camera," Polishook said.

In his first years of high school, sophomore Jack Polishook has been through it all. He’s in Broadcast, where he occasionally reports news on the Wolfcast. Football was his main extracurricular activity in middle school, but he quit in order to pursue another side of sports: the discussion and the recording of footage related to each game. Of course, he’s not completely done with participating, as he’s also taking wrestling and track. That is, he would be, if not for COVID-19.

“When COVID-19 hit, suddenly ending the school year and not being able to go back to football or any other sport was a pretty big whiplash for a lot of people,” Polishook said.

Like many, the pandemic felt jarring to Polishook, and the extra months at home social distancing felt like a drag that he would endure for years.

“I didn’t see any friends for a month and a half, and the days felt slow while I barely did anything,” Polishook said. “March and April of 2020 were particularly the hardest times for me.”

But the slump didn’t last forever. The empty time that Polishook had so much of could be allotted for many different activities. He could watch movies, exercise and listen to more music, a pastime that became increasingly important for him.

“I started listening to a lot more music around February just because I felt like it and I only listened to a couple genres,” Polishook said. “Music was a lot more important to me over quarantine because I had more of an emotional connection to music. Two of my favorite artists are the rapper Kanye West and the band Animal Collective.”

Another common method of killing time during the COVID-19 pandemic were video games. Releases and updates of several big games coincided with the time students had to start quarantining at home, especially so for the summer months where games like “Among Us” and “Fall Guys” were released. Jack has found himself sinking much time, and becoming quite adept, at the former.

“I’ve already sunk 82 hours into ‘Fall Guys’,” Polishook said. “In one week, I also won 12 matches between 60 people. I’ve become alright at responding quickly, moving accurately and avoiding obstacles with increased time and effort. It’s an interesting game. I’ve tried out a lot of hobbies during our time off from school.”

Now that things have more or less gone back to normal, Polishook still wishes that the current climate of school was different, but accepts that there were changes that had to be made.

“High school is still a little rough,” Polishook said. “For example, I don’t think teachers have totally figured out how to run online classes yet. But things have gradually been improving, and there aren’t any better options.”

The sophomore has also used this time to reflect on his past classes and decide whether or not he wants to continue.

“I loved playing football and miss the teammates and friends I had, but I knew I wasn’t good enough to continue playing up to college,” Polishook said. “I took Broadcast just because it’s a career choice that I’m interested in, whether that be reporting, journalism or operating a camera.”

Moving forwards, Polishook said he hopes that high school will continue to improve their conditions. He is eager to see the day when the pandemic ends.

“School has taught me a lot,” Polishook says. “I’ve made some friends that influence how I am, and some of the sports I was part of also influenced my character. Right now, I’m optimistic that the pandemic will end in less than a year or so. I don’t really know where I’m heading in the distant future, but hopefully, high school goes on without too many problems.”