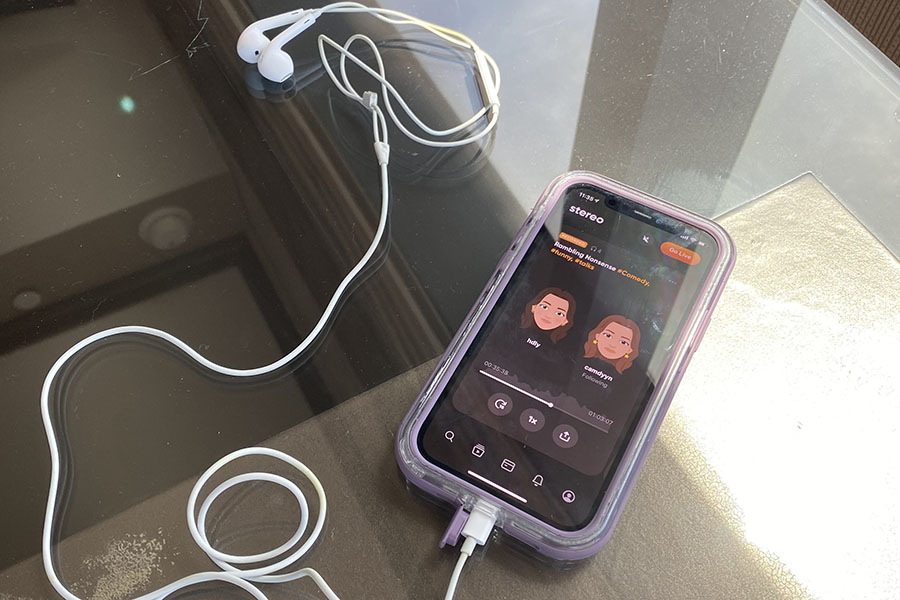 Hadley listens to her podcast to ensure that everything is good to go before she uploads it. Davis said that they started the podcast during the pandemic as a way for them to connect with their friends and family who they don’t get to see or talk to too often. "We wanted them to feel like they are right there with us having a conversation," Davis said.

With equipment ready and apps opened, senior Hadley Davis prepares for another episode of her podcast, “Rambling Nonsense.” Davis co-hosts the podcast with her sister on the Stereo app. The platform allows the duo to record episodes in real-time in a way that people are also able to interact with them live.

“We decided to call it that because that’s what we feel like we do sometimes, but in reality, we normally have a great show,” Davis said.

“‘Crime Junkie’ is my favorite podcast because I loved that the hosts were so candid and it seemed like it was just two friends talking about a story they heard on the news,” Davis said. “Plus, I’m a huge true crime fan so any form of media that I can learn about cases through is always interesting in my book.”

Their podcast doesn’t really have a set topic, however, they’ve talked about broad topics like pop culture and more niche topics like their favorite places to eat. Davis and her sister are both diagnosed with ADHD and after a whole week of school and having to focus, they relax and let loose for the hour-long recordings of the podcast.

“We might start with one topic but by the end, we are talking about something completely different,” Davis said. “It’s been very therapeutic to be able to just have these long conversations about everything and nothing.”

Each episode is about an hour-long, and currently, they have four episodes out. Davis said that they took a bit of a hiatus for the past month since they have been busy with school, but they are getting back to it as soon as possible.

“We plan on hopefully continuing this for as long as possible, especially since I’m going to college and we won’t get to talk as much,” Davis said. “We have lots of people that we plan on having on the podcast, most of, not all of them are our friends, but we have lots of things we want to do with the podcast. At the end of the day though, the podcast is about sitting down and connecting with another person.”

So far, their podcast has around thirty people who follow and listen consistently. Davis said that the interesting thing about the Stereo app is that anyone can pop in and listen to the podcast at any time in real-time. For this reason, Davis said that she and her sister made a rule that they don’t share any personal information, even their last name, on the show. According to Davis, they don’t even talk about their age or say their pets’ names.

“Privacy and internet security is a big deal to me, so having this barrier of things to not share on the internet for all to see is so crucial for both me and my sister,” Davis said.

Although Davis is going to college in the fall, she said she hopes that she can still continue the podcast with her sister.

“I will be going to TCU this fall to study speech-language pathology,” Davis said. “I’m hoping that my sister and I will still be able to meet at least once a month over the phone to record an episode of the podcast, but we will just have to wait and see.”