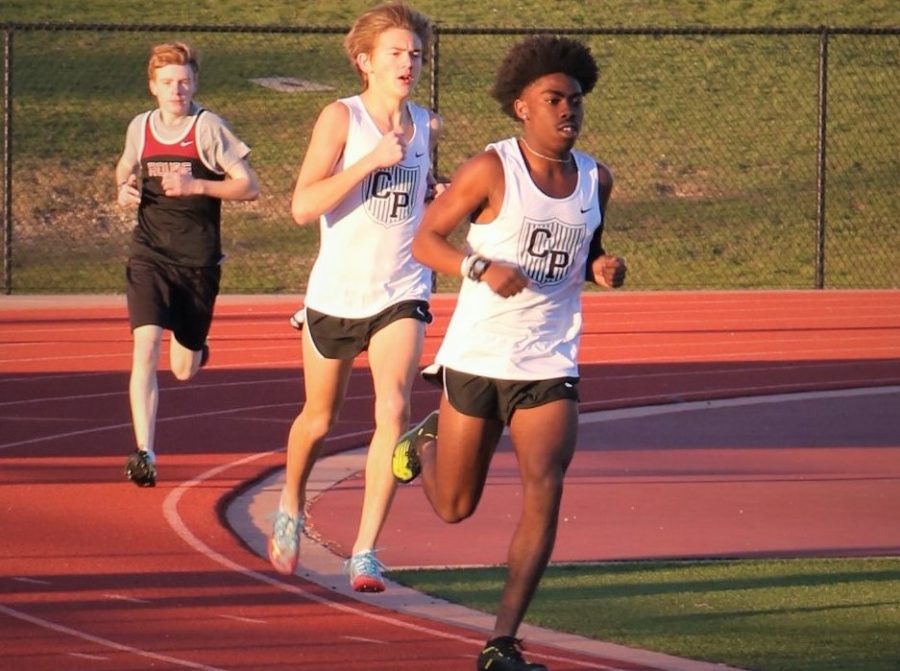 Senior Tiras Parker-Pie runs the two mile race in the team's first track meet of the season on Feb. 6. The team got first place in the meet against Rouse. "This was one of the few races I was able to participate in before quarantine, but I still gave it my all," Parker-Pie said. "I will be committing soon to run in college which I am very excited about and hope to take this sport as far as I can."

Making varsity cross country is never easy, especially when it’s on as competitive of a team as Cedar Park. That’s why senior Tiras Pie had to fight in order to cement himself as an integral part of his team. It took more than just hard work and dedication, it also required him to grow as a person and look at himself in order to see what needed to change. This paid off and his experiences at CPHS have helped change him for the better.

“I credit my success to the great people and teammates at my school,” Pie said. “As well as coach Grenner for understanding and going an extra limb to make sure I became the best athlete I could be.”

Pie plans to run Division 1 track and field on a scholarship fund at Loyola Marymount University in Los Angeles. There he will be studying business management and he hopes to eventually go to Law school.

“One thing I learned at Cedar Park that will help me in the future is the skill to adapt to changes in my life,” Pie said. “Throughout my four years of high school we had three coaches, all very different and it is very hard to adapt to different systems and I was able to be successful in all.”

Pie said that Cross Country helped mold him into the person that he is today, as well as help teach him lessons that he otherwise wouldn’t get anywhere else.

“Cross Country has shaped me into a hard worker,” Pie said. “We get up at 6 a.m. for 80% of the year every morning and run sixty miles a week. We have to dedicate our sleep, eating, and fun around our training to become the best runner possible. It has taught me how to work hard and dedicate myself to something, despite the pain.”

Pie claims that his greatest mistake was not realizing that life is to short to get hung up with all the little things. He feels that if he had refocused on what was important rather than the tiny inconvenience that happened in the past he would’ve have saved himself so much time and effort.

“My advice to future Cedar Park students is to embrace the current moment and stay in the moment,” Pie said. “Don’t take it for granted because it will be over fast so give it everything you got and have the most fun possible.”