Senior Retells Success in Performing Career, Plans for the Future 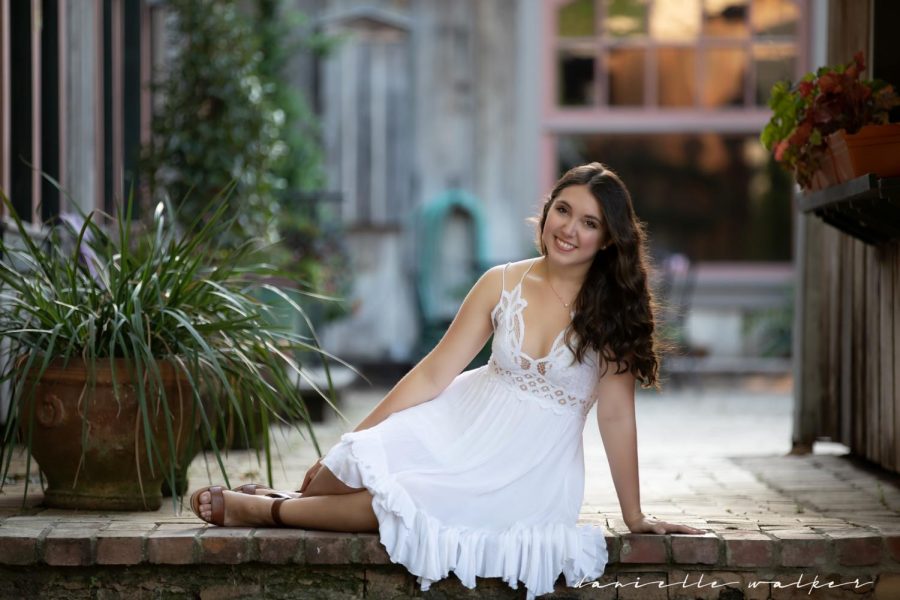 Smiling, senior Lindsay Doves poses for the camera. Dove has played eight theatre roles in her high school career, all varying in genre. However her favorite was Elle Woods in "Legally Blonde." “I got to perform as a character I wouldn’t normally play,” Dove said. “Altering my appearance and personality was probably the most difficult part of playing Elle Woods. I prepared by seeking constructive criticism from my directors and walked in heels for the entirety of rehearsal to get used to Elle’s energy.”

As the curtains rise, she checks for all her props and costumes one last time and takes a deep breath. When she walks out of the wings and as steps on stage, she transforms into Dorothy or Ursula or Ambrosia Jekyll.

Senior Lindsay Dove has played eight theatre roles in her high school career, all varying in genre. To earn her roles she had to begin training her voice professionally in middle school.

“I decided to start professional training in middle school because I started competing in choral competitions and was not experienced in that type of singing,” Dove said. “I wouldn’t say I struggled singing when I started, but it was a definitely new experience that I had to adjust to.”

Despite playing multiple roles, Dove said that her role as Elle Woods in “Legally Blonde” last year was the most noteworthy. She prepared both mentally and physically, searching for ways to improve.

“I got to perform as a character I wouldn’t normally play,” Dove said. “Altering my appearance and personality was probably the most difficult part of playing Elle Woods. I prepared by seeking constructive criticism from my directors and walked in heels for the entirety of rehearsal to get used to Elle’s energy.”

While playing a leading role sounds good on paper, Dove said that she considers the expectation of dancing difficult to accomplish. This was true for her role as Elle Woods where she had to sing and dance at the same time, and Vera in “Funny Girl,” where knowing tap played a heavy role.

“The biggest obstacle I’ve had to face in my performance career is dancing,” Dove said. “I’ve always struggled with dancing because I haven’t had proper training and when you’re cast as a lead, you’re also expected to dance. I overcame my struggle by asking our [former] dance captain, Caiti Dodge, for specific help when I wasn’t in a scene. Caiti was an amazing teacher and I quickly picked up the choreography when each move was demonstrated slowly.”

Dove describes her biggest achievement as performing with the AllState Treble Choir this year at the annual Texas Music Educators Association (TMEA) convention in February. To earn that honor, Dove had to be ranked high in her TMEA region individual audition, advance to TMEA Area auditions and be one of the highest-ranking performers at Area to qualify for a spot on the AllState choir.

“I was very nervous to perform with the AllState choir because I had never performed with a choir of that magnitude and in front of that large of an audience,” Dove said. “I got to perform with two of my best friends, Ally McKeon and Emma Vaughn. We had been working for six months and we couldn’t have been more excited.”

“I was over the moon and genuinely shocked,” Dove said. “I told my family first and then my vocal instructor because she was a huge part of the reason I was accepted.”

When Dove had seven colleges accept her into their program, she had a difficult decision to make. However, the decision was made easier when she was accepted into Professor Darlene Wiley’s vocal studio, part of the University of Texas at Austin’s Butler School of Music program. According to Dove, Wiley only chooses one undergraduate freshman every year to teach, and Dove got the offer.

“I had dreamed of studying with her because my current vocal instructor also studies under her as a doctoral student,” Dove said. “Wiley normally only teaches graduate and doctoral students, so when I found out I got a space in her studio, I immediately committed to UT Austin.”

Dove will major in Vocal Performance when she attends UT next fall. Dove said she decided to choose the major because she could not imagine not making a career out of her passion of performing.

“Performing has allowed me to grow and get out of my comfort zone,” Dove said. “When I was younger I used to be very shy,  and performing taught me how to express myself and be heard.”