When CPHS receptionist Phyllis Hahn heard her son’s music composition being played by the Austin Symphony two years ago she was awestruck. Finally, after all her sons tireless work on the piano and his computer, she could hear his song coming to life.

Now she’ll get to hear it again. Her son, junior Drum Major Wyatt Hahn has been selected by the Austin Symphony in the annual Young Composers Competition. He was originally selected freshmen year and has been chosen for the second time this year.

According to Wyatt, a junior this year, his music has matured since his first piece he wrote the summer after eighth grade.

“I do a lot more planning instead of just writing as I go,” Wyatt said.

Not that he doesn’t get spur of the moment ideas. Wyatt makes sure to have his little black book with him just in case. One time, his mom remembers, Wyatt handed her a napkin marked with dots. She was shocked when he took the napkin back and began entering into his composing software.

“I don’t know how his brain works,” Phyllis admitted.

“I talk to myself a lot,” Wyatt said. “I’ll say something and think ‘Oh, that’s kind of cool.”

Although he didn’t discover his love of composition until middle school, he has loved music from an early. Phyllis recalls Wyatt asking to take guitar lessons.

“From the start he was very good,” Phyllis said.

To Wyatt, now that he’s older, the most important thing about a composition is the statement it makes. He strives to impact his audience, including his mom, with his music.

“I can feel the emotion he puts into it,” Phyllis said.

The Austin Symphony will perform his piece on Apr. 3 at the Long Center. 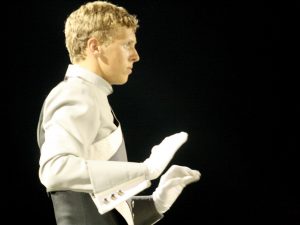