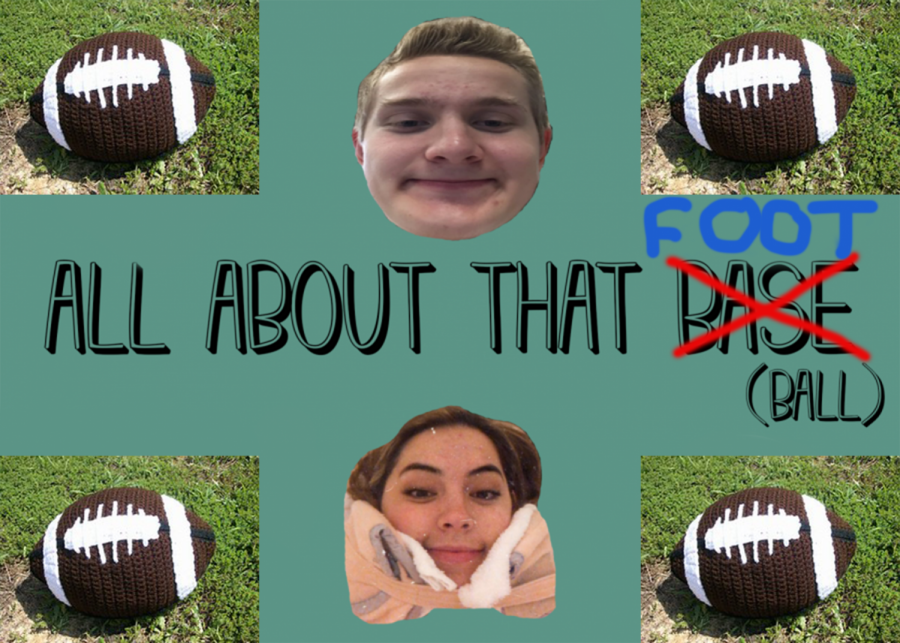 The MLB Playoffs are getting underway. Check out Addy and Justin’s preview and predictions.

All About That Football

Welcome to the 2019 NFL Season, where we will find out if hype and reality are the same things. With big-name stars finding homes in new places, the NFL will look a bit different this year. With competition in nearly every division, there’s balance across the board. Here are our playoff seeding predictions for the upcoming season.

The Patriots are “still here,” as the team likes to say. With 42-year-old QB Tom Brady still at the helm, the Pats are poised for yet another AFC East Title and Super Bowl run. A division crown for New England would be their 10th consecutive and their 17th in 19 seasons. Though TE Rob Gronkowski is now retired, WRs N’Keal Harry, Julian Edelman and the recently reinstated, Josh Gordon, provide Brady with more big-time targets. Throw in RB Sony Michel and it’s easy to see why New England will be right back in the playoffs this year. The Patriots are already the greatest dynasty the NFL has ever seen: nine Super Bowl appearances and six Super Bowl Titles since 2001, tying their rival, the Pittsburgh Steelers, for the most Super Bowl wins. Tom Brady is, and has been for a while, known as the “GOAT.” Rob Gronkowski’s “Gronk Spike” has been one of the signature images of the Pats’ dynasty. The Tom Brady-Bill Belichick duo will pick up right where they left off last season, as they defend their sixth Super Bowl Title.

The Cleveland Browns are back, folks. After being the laughing stock of the NFL for the last 20+ seasons, there is finally a reason for hope in Cleveland. Following the 0-16 miserable 2017 season, GM John Dorsey traded for WR Jarvis Landry and FS Damarious Randall and drafted QB Baker Mayfield and CB Denzel Ward. Then everything changed. Mayfield took over in week three and the Browns began to light it up. They ended up winning seven games last season, a drastic improvement over zero wins the previous year. This offseason, Dorsey started by trading for DE Olivier Vernon to pair up with superstar edge-rusher, Myles Garrett. DT Sheldon Richardson was also brought in, giving the Browns arguably the scariest defensive line in the league. The world knows what happened next. Odell Beckham Jr. and all of his one-handed catches are coming to Cleveland. Beckham is not only a top-five WR in the league, but he also brings a swagger that the Browns were looking for. Mayfield, who broke the rookie passing TD record a season ago, will now be throwing passes to OBJ, Landry, Higgins and Njoku and Nick Chubb and Kareem Hunt (once he serves his suspension) running the ball. It’s easy to see why the Browns will be in the Super Bowl conversation this season and for years to come.

Led by reigning MVP QB Patrick Mahomes, the Chiefs are looking to go one step further than last year, where they ultimately fell in overtime to the Patriots in the AFC Championship Game. The biggest priority for Chiefs GM Brett Veach this offseason was revamping and improving the defense as a whole as Kansas City’s defense was at or near the bottom in almost every defensive statistical category a season ago. Veach answered the call by signing DE Frank Clark, SS Tyrann Mathieu and CB Bashaud Breeland. The Chiefs also parted ways with LBs Justin Houston and Dee Ford as well as SS Eric Berry, a series of moves that raised some eyebrows around the league. The AFC West will be very competitive this season, as both the Raiders and Broncos should be much improved from a season ago. The division will still likely come down to the Chiefs and Chargers, however, as both teams are considered Super Bowl contenders by many experts. Their week 17 matchup in Kansas City could very well decide the division title. TE Travis Kelce, WR Tyreek Hill and rookie WR Mecole Hardman will be some of the weapons that Mahomes has in his arsenal. The loss of RB Kareem Hunt hurt the Chiefs last year, but Damien Williams will provide Mahomes with a reliable weapon out of the backfield. Ultimately, I believe the Chiefs will win the AFC West and will be the three seed in the playoffs.

After the news broke that Colts QB Andrew Luck retired, the Texans are now the favorites to win their sixth AFC South title. The one flaw in Houston last season was the offensive line, specifically in pass protection. Texans QB Deshaun Watson was pressured and sacked more than any other QB in the NFL last season. The Texans addressed that problem by drafting OL Tytus Howard from Alabama State in the first round. Provided the O-Line holds up, the Watson-Hopkins duo can be as deadly as ever for opposing teams. Texans RB Lamar Miller will miss the entire 2019 season with a torn ACL, opening up an opportunity for Duke Johnson to start, who was recently acquired from the Browns earlier this offseason. WRs Keke Coutee and Will Fuller V will be back on the field after suffering injuries last season. On the defensive side of the ball, DE Jadeveon Clowney was recently traded to the Seahawks. DE JJ Watt is the face of Houston’s franchise, but will now be playing without his Pro-Bowl counterpart Clowney. Regardless, a division that seemed promising in terms of balance is now heavily favored Houston’s way. I expect the Texans to ultimately come out on top of the AFC South division once again.

2018 marks one of the most devastating seasons for any Saints fan. After getting a playoff berth ripped for them because of one of the worst calls in NFL history, the Saints are coming into the 2019 season with a vengeance. During the offseason, the Saints extended powerhouse WR Michael Thomas with a five-year, $100 million contract extension, making him the highest-paid wide receiver in the NFL.  With an offense built around Brees, Thomas and running back Alvin Kamara, the Saints offense will put every opposing team’s defense to the test. On the defensive side, the Saints have struggled historically, but with key players such as defensive end Cameron Jordan and cornerback Marshon Lattimore, Saints fans saw huge growth in the 2018 defense. The most anticipated game for the Saints this season will be against the Los Angeles Rams in week two, where they will attempt to fight back after their 2018 playoff-ending loss. The only thing that holds the Saints back this year will be the refs, so Saints fans should expect good things to come this season. With arguably the strongest offense in the NFL and a strong defense to back it up, I predict the Saints will post a 13-3 record this season.

After the Rams’ embarrassing showing at the 2018 Super Bowl, only scoring three points, the Rams are looking to redeem themselves this season. With QB Jared Goff’s four-year contract extension, the Rams are going to be seeing consistency through the 2024 season. Alongside Goff, is RB and Offensive Player of the Year Todd Gurley, who was a key player for the Rams before he missed the final two regular-season games due to inflammation. Even though he struggled in the playoffs, a healthy Gurley will be vital for the Ram’s 2019 success. On the defensive side, the Rams defense is arguably the best defense in the NFL. With the help of DT and Defensive Player of the Year Aaron Donald, who led the league in sacks with 20.5, the Rams defense will be as strong, if not stronger than it was in 2018. For Rams fans this year, a more powerful offense will have to be present in order to send them to the playoffs again and Goff will need to recover from his inconsistencies from the 2018 playoffs. If Goff can return to his 2018 regular season state, then the Rams will come back stronger than ever in the new season. I predict that the Rams will finish the season 12-4 and will be more successful when they make the playoffs.

After winning their division last year for the first time since 2010, the Bears have proven that they have the upper hand in their Bears-Packers rivalry. Despite the devastating loss to the Philadelphia Eagles in the Wild Card Round, the Chicago Bears’ defense is going to be what pushes them into back-to-back postseason appearances. With the help of big-name players such as outside LB Khalil Mack and defensive end Akiem Hicks, the 2018 Bears defense was more powerful than ever. With running backs struggling to break through defensive tackle Eddie Goldman in the middle and facing Hicks on the outside, opposing team’s rushing yards will be at a minimum against the Bears this season. On the offensive side, the Bears struggled in 2018. QB Mitch Trubisky had trouble reading defenses and lacked the confidence to make quick passes when under pressure, this season is looking more promising for the young QB. With the help of Matt Nagy behind him and WR Allen Robinson on the field, Tribisky has the prime tools to help him get over his 2018 roadblock. With the help of a more confident offense to an already dominant defense, I predict that the Chicago Bears will put their devastating season-ending loss behind them and will go 11-5 this year.

It’s no secret that the Eagles haven’t lived up to their 2017 season glory days. After winning the Super Bowl, the Eagles only posted a 9-7 record in 2018, making it the Wild Card Round. With injury-prone QB Carson Wentz leading the team, the Eagles struggled in the backfield and couldn’t dominate as they did in 2017. The strengths for the Eagles this season will be a healthy Wentz being led by arguably one of the best coaches in football, Doug Pederson. Another reason why Eagles fans should be hopeful is that the team has extreme depth on both sides. With dynamic duos like safeties Malcolm Jenkins and Rodney McLeod, the defensive chemistry is going to be stronger than ever and it doesn’t stop there. The defensive depth extends into the backup players, which GM Howie Roseman emphasized in the offseason. While the 2018 season was cut shorter than anticipated for Eagles fans, the 2019 season looks more promising. If Wentz stays healthy this season, I predict that the Eagles will go 11-5.