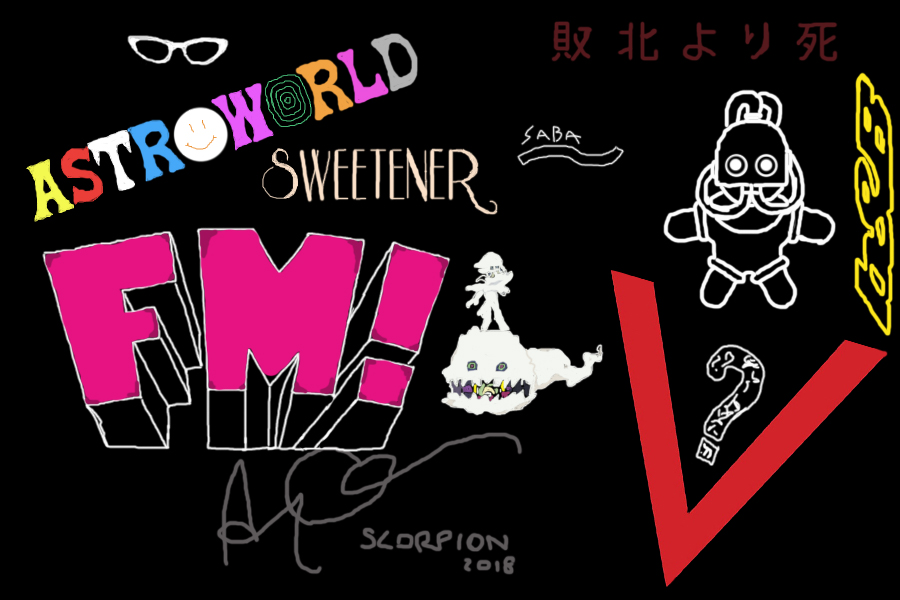 Jalen Gomez and Noah Hedges touch on the highs in 2018 music by going head-to-head with their top five albums of the year. (Graphic by Noah Hedges)

Jalen Gomez and Noah Hedges touch on the highs in 2018 music by going head-to-head with their top five albums of the year.

This year has provided a plethora of music to listen to, and even more is coming out before the year is over (shoutout to 21 Savage). Front to back, the music has been good, impactful and bountiful. With heavy-hitters across all genres releasing albums, such as Arctic Monkeys, Kanye West and The 1975, it was tough to pick what was the best, but here they are:

Pain has always been an emotion that tends to lead to the creation of some of the best art, drawn and spoken. Care For Me is the epitome of that statement. Created in the wake of Saba’s cousin’s death, the grief is sprinkled across every track in the album. In the opening track in  “Busy/Sirens,” Saba raps “Jesus got killed for our sins, Walter got killed for a coat, I’m tryna cope, but it’s a part of me gone, in this packed room I’m alone.” This showcases only a glimpse of the pain he is in. I’d like to say that this album is one of the most introspective, impactful albums released in recent memory, and it is a top-tier album released from Chicago, a hip-hop powerhouse.

Travis Scott created his magnum opus, his ode to Houston, with this album. Scott announced the album even before his sophomore album came out, Birds In The Trap Sing McKnight, back in 2016. Astroworld was made in honor of the former Six Flags location in Houston, which was called Astroworld and was a childhood favorite for him. The album is teeming with bangers such as “HOUSTONFORNICATION,” experimental tracks like “ASTROTHUNDER” and “SKELETONS,” as well as references to past H-Town legends like “R.I.P. SCREW.” He also created one of the top songs of this year, shown by his #1 single, “SICKO MODE.” As a kid who has also Houston roots, it makes this project that much more special for me. Astroworld is an album where Scott was able to express what was once his dream, but is now a reality. With this album, Scott not only showed growth as an artist, but he showed that he is cemented as a superstar.

Kids See Ghosts is the self-titled debut of the duo composed of Kanye West and Kid Cudi, which I knew right off the bat was going to be heat. They did provide the heat, which I believe led to our record-setting temperatures this summer. The seven track, 24-minute long album is a perfect length to keep the tracks fresh, and made the album as a whole was not a chore to listen to. Kanye raps as well on this project as he did on a previous masterpiece, My Beautiful Dark Twisted Fantasy, and him rapping over Kid Cudi-esque beats is a wonderful thing. Kids See Ghosts was created during a time where we knew that both artists were going through a time where their mental states weren’t the best (according to their Twitters), but after hearing “Reborn,” you then knew that they were going to be just fine.

The last album that Malcolm McCormick, a.k.a. Mac Miller, was able to make before his recent passing was his best. Miller has never been so personal and vulnerable in an album before. He leads off the album with “Come Back to Earth,” and the opening line says, “My regrets look like texts I shouldn’t send.” It is filled with themes such as self-love and psychological growth, and it’s easy to say that a majority of the album was inspired by the pain he went through during his breakup with pop star Ariana Grande. As I mentioned before, pain leads to the best art, and Miller delivered that. With the majority of the production being handled by Flying Lotus and Thundercat, the funky beats reciprocate throughout the album, noticeably on “What’s the Use?”. Additionally, I might note that the album impacted me differently before and after Miller’s death. Before, it felt like he had overcome demons and would be on his way to living a happy life, but after, it felt like he was ready to move onto the next phase of his life, which would be death by accidental overdose.

Tom Misch creates the funky, soulful music that many say is missing from the current state of music nowadays. Front to back, the album is filled with music that just makes your hips move and makes you want to break out in dance. Personally, I don’t dance, but my head will bop accordingly with this album. With tracks such as “Movie” and “Man Like You,” Misch gets a little more personal, but does not stray away from keeping it funky. Another nice touch to the album was an instrumental cover of the iconic Stevie Wonder song, “Isn’t She Lovely.” All in all, everybody needs to give this album a listen.

Of course, there are plenty of albums that just missed the top five cut, however some just need to be loved on. Die Lit by Playboi Carti is an exciting, fun album that makes me very happy every time I listen to it. With bangers front to back, such as “Love Hurts” to “Flatbed Freestyle,” Carti can’t miss right now. Same with Smino and his sophomore album Noir, a soulful yet funky project from the St. Louis rapper. His progression as an artist is noticeable with this album, making this his best work yet. With songs such as “Z4L,” “L.M.F” and “We Got The Biscuits,” this album will definitely be in rotation for a long time. Lastly, Testing by A$AP Rocky is an experimental album from him, as he is trying to find new sounds to build from and continue after the loss of his creative director, A$AP Yams. He does this extremely well, and sets the foundation for his future work.

For my taste, rap this year has had a huge impact on me. Aside from the beats from songs like that bop called “SICKO MODE,” I listen to rap is because I can relate to the words and the artists, and I can understand the pain they rap about and the tribute that they give in their songs and albums. This year has been a huge year for music itself, but in my opinion, especially for rap.

Travis Scott took the world on a trip back to Astroworld with this album, which was a theme park in Houston, TX. Travis was born raised in Houston, and Astroworld itself seemed to be a big part of his childhood. This album took the world by storm, as it single-handedly transformed rap music, and gave tribute to the good times in life, with songs such as “STARGAZING” and “SICKO MODE.” Not only was Astroworld a solid album that is currently ranked #4 on Billboard’s Year-End rap albums chart, but Travis proved with it that he can rule the world. If Jalen and I could have agreed on one thing, it would be that Astroworld deserves to be on the top of any top five list.

With this being Post Malone’s second LP, he proved to the world that he is a musician before being a rapper. He released different types of songs on B&B, with chill songs like “Stay,” while more of his rapper mode came out in the well-known banger, “Better Now.” This album was long awaited ever since he dropped “Rockstar” with 21 Savage in Sept. 2017. After his album Stoney went triple platinum, B&B needed to be a big project for him to show that it wasn’t an accident that it did so well in the industry. Post Malone has released more music since B&B, which makes his fans (like me) much more excited for his next big project, which is yet to be determined.

Juice WRLD released Goodbye & Good Riddance on May 23 of this year. He released two songs earlier in his career on Soundcloud that turned his career around for the better. “Lucid Dreams” and “All Girls Are The Same” both brought in a ton of streams with this album, and gave Juice more fans. This album touched on his sadness, his past relationships and hardships, and with songs like “Lean Wit Me” and “Hurt Me,” he proved that his dynamic can be changed in any song.

This album made the cut for my top five of the year, although it was released just recently on Dec. 6 after XXXTentacion died. It is rumored that his core producers, along with his mom, went in and found previously recorded songs to piece together X’s life story for the album. While conspiracies have been created on Twitter about the creation of SKINS, people who loved X and his album have continued to show their support for him and his family over the past few months. A huge deal for the album seemed to be that the song “Guardian Angel,” which featured a familiar, yet foreign beat. After listening to the song a few times, I was reminded of a previous X song, “Jocelyn Flores” from 17, his album that was released in 2017. I came to the conclusion that the beats are the same, though on “Guardian Angel” the beat is backward. This proved that X’s legacy will live on through his mind in music and through his so-called “final statement” as a rapper.

These honorable mentions didn’t quite make the cut for my top five, but still had an impact. Quavo Huncho features, coincidentally, Quavo, and he raps about the ups of life. I liked this album because it gave me something to listen to when I needed to remember that you can always be happy. As for Scorpion, Drake had an interesting year. His songs created dance crazes, along with all-around good music. Many have heard about Keke in “In My Feelings,” and know the “I only love my bed and my momma,” line from “God’s Plan.” This album was a bit overplayed, which is why it did not make my top five, but it still deserves recognition as he became Billboard’s Year-End #1 artist in 2018. Lastly, Drip Harder simply went hard throughout the whole entire album. I could, of course, go into detail about Lil Baby & Gunna’s project, but it went hard the whole time.

As 2018 comes to a close, we look back on all of the ups and downs that music brought to the world. We look forward to new artists, new sounds and new sights in the music industry. 2019 has a lot in store; we will most likely be seeing familiar faces, like Juice WRLD and Travis Scott, and maybe some new faces as well that could show they deserve a spot at the top of the industry.

The Wolfpack • Copyright 2020 • FLEX WordPress Theme by SNO • Log in