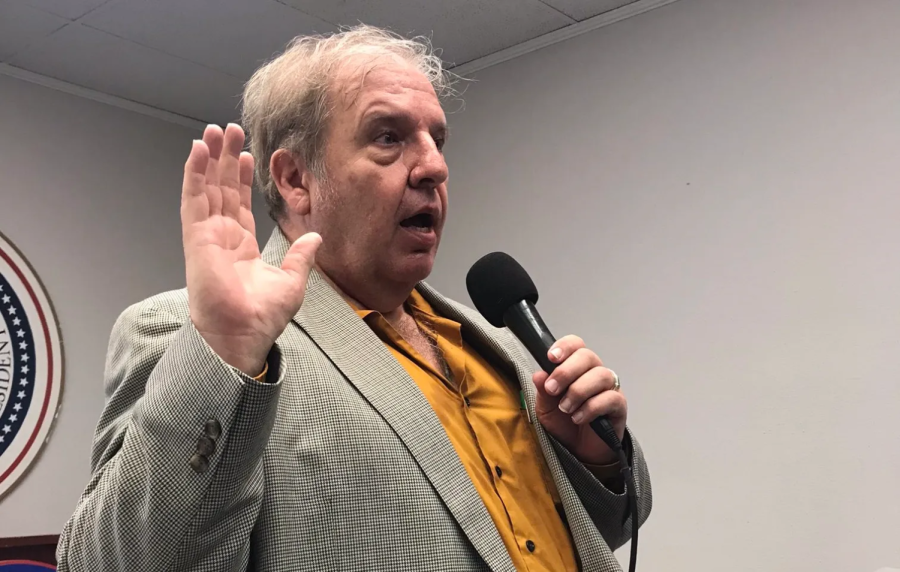 Candidate David Doman is running against candidate and current President of the Board of Trustees, Trish Bode, and candidate Mike Sanders.

Q: Why are you running for school board?

A: Well, several reasons. I’m a 23-year resident of LISD. Both of my children went through Leander schools, from Steiner Ranch Elementary through CP. They’re both in their thirties now, doing very well, but I now have a 5-year-old granddaughter who started kindergarten about a month ago – six weeks ago now. Got to tell you, I’m a very proud granddad, but I’m afraid that the quality of LISD now is not what it was when my two children went through, and so I want to bring that quality back up to what I know all the schools in LISD can do for you guys. It may take a couple years, but I think we can have the ability to do that.

The second reason – and this is somewhat of a sad one. When I first started running, I had a friend of a friend whose son died of fentanyl and that became a cause celebre for me, making sure we have adequate supplies of Narcan in each school and down to the grade school level. But since then, I was giving one talk and one of my –  another friend of a friend came up to me and said “No, you have two people that you know that died of fentanyl.” It’s an epidemic and it’s going to get worse before it gets better. So, those are my major concerns, improving the quality of the schools and protecting you guys.

Q: What would you say – your experiences in the past, how they made you qualified to run for school board?

A: Well, I’ve been involved at the State Board of Education level. In addition to that, I have taught at the middle school level and high school level and college level. I even have written a college textbook, it’s an engineering textbook. But beyond that, I founded a design center here in town that I grew to well over a hundred individuals on three continents, so I think that demonstrates my ability to manage a multi-site effort. So with those experiences in terms of education, and management, I think I’m at least somewhat qualified. I’m hoping the voters in – I’m assuming the two of you guys are going to be 18 by – [“I can’t yet.”] Okay. Well, I’m going to convince you that I’m the right person to vote for.

Q: So what’s your stance on Proposition A and why?

A: Prop A. The government will always get its money. No matter what, they’re going to get what is due to them. And that’s what we’re paying back with Prop A. Either we vote in favor of Prop A and therefore can tell the government what assets in LISD that we can pay, or give up to pay those funds, or we can reject it and the government will take what assets it wishes to take. So for me, I’d rather be in charge of determining what assets I want to give up as opposed to telling Uncle Sam “Go for it.” So I’m in favor of Prop A.

Q: And conversely, what about Prop B?

A: The teachers came to the LISD with “This is our proposal,” and it made sense. And the previous board, I guess the current board of up until next month said “No, we don’t like that. We are going to do what we want to do,” despite what the previous teachers and parents have said. So to me, that sounds almost like a shell game where they are shifting funds around trying to tell parents “Oh, we’re not raising your school taxes.” They’re not raising them this year. But the effort, VATRE (Voter-Approval Tax Rate Election, Prop B) will allow them to raise them incredibly more in years to come. So I’m against VATRE. I would think we need to vote it down and then the new board can try to create a better situation for the students, for the parents and for the average taxpayer. Which is about the same thing.

Q: So just to confirm, you were in favor of Prop A and against Prop B.

Q: So going off of that, if Prop B doesn’t pass then the district needs to cut over $32 million from the budget next year. What specifically would you – what are the top three places for those cuts to come from? I know you said you’d rebuild it, but if that were to happen.

A: Ok. There are, I believe, 11 assistant school directors right now. That seems a little, like, overkill to me. There are vastly more counselors than I believe are necessary, but right now we are underperforming in the number of teachers that exist in LISD, so the cutting of this vast quantity of school teachers? A, that’s not true. We may not be able to hire as quickly as we should, but there is a future in hiring more teachers with redirecting of funds appropriately. So we’re not losing it. I referred to earlier about VATRE almost being a shell game. That’s the shell game. You know, “Pass it or you’re going to lose all these teachers.” No, we’re not. I’m sorry.

A: Lots of possibilities there. One, the funding that’s going to be going to the teachers? That’s coming out of the general school fund. Well, you can pass that over once. And people can sit there. “And I’m not being – my taxes aren’t being raised, and I’m hiring all these new teachers.” Well, that quarter that you handed over or that nickel or however much comes from other school assets. So we are stealing from Paul to pay Peter, and that just seems wrong. I’d rather have a top-down appraisal of what the budget looks like. Look at it this way. Before COVID, we had a per student budget that is woefully below what the current per student budget is. COVID was bad, but I don’t understand why we have this huge increase. So, you know, we need to look at the entire budget top-down and find the missing resources.

Q: So one of the questions we hear a lot in the community is, you know, why our district is in this financial situation to begin with. How would you answer if you were asked that by a voter?

A: I think I’ve somewhat elaborated on some of those. The fact that we have 11 assistant school directors, the large number of per school counselors, the need –  parents should be in charge. And two, the only reason any of us are here is for you guys. We want to make your future better. And so any dollar that is spent for you guys is good. Any dollar that is spent on – you’re aware of DEI (Department of Diversity, Equity and Inclusion) and stuff like that? Ok. Policies like that, whether they are good or bad, detract from the dollar that should be spent on you guys. That’s where we need to cut it. DEI may be good, it may be bad, but it is being overspent. We want to cut back on items like that.

Q: Jumping topics a little bit, are you satisfied with Dr. Gearing’s job as a superintendent? Or why do you think otherwise?

A: The current school board has been giving the doctor a good rating. So whether we feel that he could redirect things – yes, there are things that can be redirected, but that doesn’t mean that he’s not doing a good job. He’s doing what the current school board wants him to do. So one of the first things that we need to do with the new school board is “We’ve done a great job. Here’s how we want you to redirect your efforts now. Do a good job here.” So it’s not “Oh, you did a good job for those people over there. Bad.” No, it’s “Good job, now do a good job here.” So that’s my view on things.

Q: Yes, and that’s the board speaking to the doctor?

Q: So you mentioned you had some children who had been through the school system? How was their experience in the district? How did you feel?

A: They had a fantastic time. My younger daughter – she’s just turned 30 –  Vandergrift was open her senior year, and she was given the option. You can either graduate at CP or graduate from Vandergrift. And Aaron, my daughter, said “I’m staying here.” That’s also one of the years that CP won – it was still a District 5 school – District 5 State Marching Band. It has always been a pride in LISD in general, but in CP specifically. She loved it here. Both of my children enjoyed going all the way from Steiner Ranch Elementary to here. Like I said, they are both doing very well. My son’s at Intel. My daughter is at a software startup on the south side of town, and they’re making their dad real proud. So, yeah, I’m happy with their experiences and I’m sure they are happy with their experiences here.

Q: So in the last two years, you’ve heard the term election integrity in politics. Do you believe there’s problems with our election system? Not just nationally, but in local elections like this.

A: I have been involved at a – with one of two big political parties in Travis County with their elections integrity organization. I can tell you there are worries, but there are no documented smoking guns. I think every election needs to be monitored. My wife is an election monitor. Don’t worry, she’s not going to be monitoring my race, don’t worry. Although she could, I’m honest. But no, she’s going to be monitoring one of the other voting areas inside of Travis County. She’s been doing it for a couple of years now. So there’s always a need for monitoring, but I think at least in Travis County, we are better than in a lot of places in this country. Don’t want to sound too paranoid there.

Q: And just one final question. In the event that you lost the election, would you accept that outcome?

A: Yeah, I have lost elections before, and it hurts for an hour. And then you pick up your pieces and you say, “I’m going to go forward and I’m going to fight the good fight where I can fight the good fight,” you know? In fact, I lost a primary earlier this year trying to run for State Board of Education. Ok, then that allows me to do something else. Let’s say, LISD. And that’s why I’m running in LISD. I have these worries about what the school quality was and what it can be again. And I have these worries about my friends, families suffering. And those are the things I am fighting for now. So I will just keep moving forward.

Q: Thank you so much. Any closing comments you wanted to give?

A: Other than – I have been thrilled with interviews in the past and exposure and allowing me to come out and talk. With all that being said, I am more thrilled by being approached by, you know, the journalism of the future out of CP. So, yeah, keep doing what you guys are doing and you will make CP proud and make LISD proud.